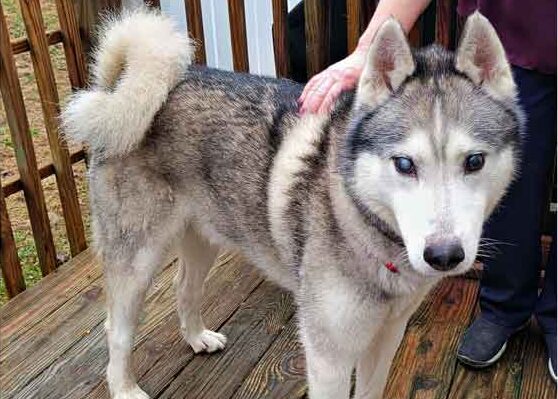 UPDATE: ADOPTED! Sometimes things are just meant to be! Dallin really lucked out when he landed in a foster home with years of experience with sight-impaired Huskies. Poor Dallin not only had to adjust to another change but we also learned his condition was more complicated and painful than we had anticipated. The decision was made to have our friends at Metropolitan Veterinary Associates perform a bilateral enucleation. He recovered nicely and his loving foster parents helped him progress. During that process, they realized he was meant to be with them. We agree! Congratulation to Dallin and his new forever home! 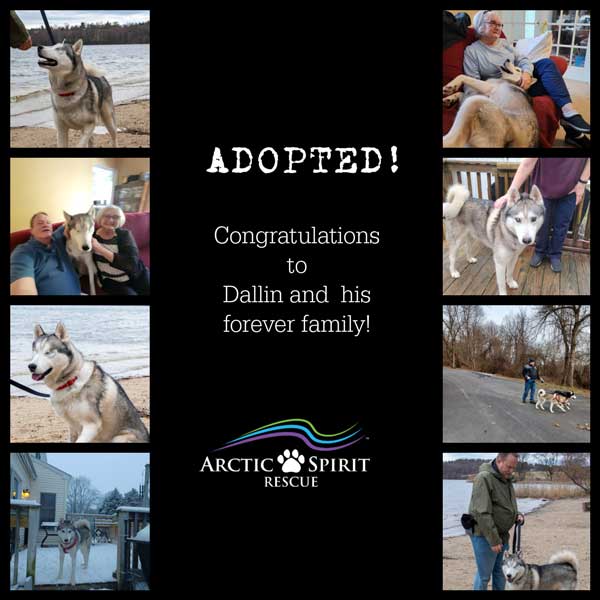 Available Soon!
Meet Dallin – a 10 year old Husky who was found wandering alone in a local remote area. Dallin is completely blind due to what is suspected to be a chronic inflammatory condition that was left untreated. He has absolutely no sight and no ability to detect light. We immediately took care of basic veterinary care and also took him to see a canine ophthalmologist who confirmed his condition and also detected major cataracts that have developed in each eye. We attempted to mitigate the growth of the huge cataracts in both eyes but Dallin did not tolerate the drops necessary multiple times per day. After consulting with his ophthalmologist at Metropolitan Veterinary Associates he will be scheduled for a bilateral enucleation with Dr. Corr at MVA. which is basically the removal of both eyes. This will eliminate the stress of chasing him around with the drops and numerous follow-up visits with various vets. It will also ensure that Dallin will be pain-free allowing him to move on with his life. Dallin has settled in very well at his foster home and is quite affectionate. He’s making up for lost time and is soaking up all the attention he can get which even means sharing the same side of the sofa with his humans despite his size! He’s playing with his canine foster siblings now so we’re hopeful he can be placed with other dogs. Dallin’s care is ongoing and is being adjusted as we get to know him better. He has a very sweet personality and has already made many friends. Follow his progress on social media as we prepare him for his search for a forever family.

Dallin’s veterinary bills have been significant. If you’d like to make a donation on his behalf please visit our DONATE page. Dallin thanks you!