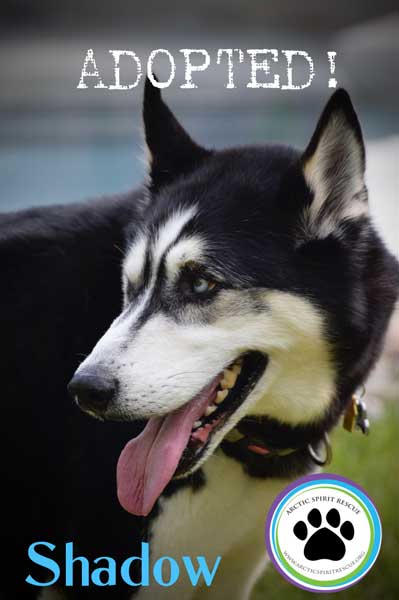 Shadow found his forever home! Actually, he didn’t have to look too far. His foster parents decided he belongs with them. Part of our foster agreement is giving our foster homes the first opportunity to adopt their foster dog. We couldn’t be happier for this handsome guy! Congratulations to all.

If you’re looking for a new running partner Shadow’s your guy!

9 year old Shadow was adopted by a single man as a puppy and was very well loved. Sadly, his beloved Dad was diagnosed with cancer two years ago and fought hard to stay with his beloved pup. He lost his battle just recently and parted ways with his constant companion. Shadow was a great comfort to him throughout his treatments and decline and was always by his side. As Shadow was so loved, the man’s 90 year old parents vowed to find a safe home for him since they were unable to keep him in their retirement community. They were determined to not leave him behind in a shelter and while tasked with the overwhelming job of settling their son’s affairs and clearing out his home, they persistently reached out to rescues. We knew that Shadow needed us and we wanted to provide the peace of mind this man’s parents so deserved. As expected Shadow was initially confused and is still settling in with his new life. It’s a different world from what he was accustomed to over the past two years.

Shadow is adjusting to his new life and does best when new things are introduced slowly. He’s a friendly, very active guy and loves to play with his toys. This handsome guy is EXTREMELY ACTIVE and athletic and will require an equally active adopter who can keep up with him. Despite his age he’s very strong and is always ready for a brisk walk (or run). A home that has previous canine experience and will be willing to continue working with him so that he can gain the confidence he needs to make a positive transition to yet another life change will be best. In return, he will be an amazing companion for that special person. A fenced yard would be ideal. Shadow is neutered, up to date on all vaccinations and vet care, and is microchipped. Shadow will do best in a home where he’s not left for long periods of time. He’s a vocal guy and will need to live in a home where his friends and neighbors appreciate his Siberian songs. Shadow is not accustomed to living with children so at the present time we would not be comfortable placing him in a home where he’d be exposed to young children. Due to his previous living conditions, Shadow is not used to being left alone for significant periods of time. He’s hoping to find a home where one of his loved ones is home most of the time. We have determined that Shadow would prefer to be an only dog. He loves his people and is happiest when he doesn’t have to share them. We’re sure that in the right environment this handsome guy will thrive!

Shadow will do best in a home where he’s not left for long periods of time. He’s a vocal guy and will need to live in a home where his friends and neighbors appreciate his Siberian songs. Shadow is not accustomed to living with children so at the present time we would not be comfortable placing him in a home where he’d be exposed to young children.